First off, Happy Halloween to those who celebrate it. I hope you have a fun-filled day of costumes, candy and all that jazz!

Anyway, today’s topic is light bulbs. I know, boring right? In the days of being energy-conscious and “green” it seems we have a lot of choices for light bulbs. There are still those who insist on incandescent bulbs and are willing to pay the much larger electric bill associated with running those.

For those of us who are more energy conscious and on more of a shoestring budget that really isn’t an option, though. That said, for those of us on the autism spectrum, it seems many of the alternatives are just absolutely unpalatable – from the compact fluroescent lights (ugh!!!!), to piercing halogens and even a lot of the LED bulbs out there which have almost a bluish tint and are way too intense.

Well, when shopping for bulbs at the Lowe’s just up the road from our apartment complex, Laina and I stumbled across these in a display and decided they were just the ticket: 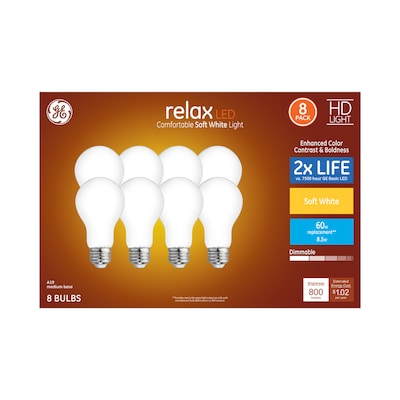 These GE Relax bulbs have a lovely soft white appearance – even softer than a soft white incandescent bulb! This A19 60W replacement bulb consumes just 8.5W and is a great option for anyone, but especially those on the autism spectrum. It will give you the light you need but without the irritating overstimulation.

I have outfitted my entire unit with these, from my living room lamps to the bathroom and closet light fixtures. My kitchen already has LED track lights but those aren’t horrid so I left those alone. The only thing they would not be an option for is totally enclosed fixtures as these are not rated for those. As with all of those types of fixtures, you’ll need to choose bulbs that are rated for them or remove the enclosure entirely (as I did with my closet fixture).

Anyway, I hope this helps somebody. Good luck!

I said in my previous post I had a big announcement to make. Well, I’m sure the title of this post kind of gives it away and for those of you who have been paying attention over the past few months I’m sure it comes as absolutely no surprise.

Alas, yes, it’s official – Laina and I are an item. It just kind of sprouted on its own over the past few months. As our bond continued to grow, so did a deeper-seated love for each other, to the point that well, we really couldn’t deny it anymore. Our dynamic had evolved from close friends/neuro-siblings to more of that of a couple.

For those of you who follow both of us, I’m sure this leaves you scratching your head as I’m sure you’ve heard her refer to a partner, or maybe more specifically, a “Mr. Kitty.” No, he and I are not one and the same. She is indeed married to someone else. I’m sure to many of you it sounds like I’m a total homewrecker, and I don’t know as though I’d fault anyone who actually thought that way, but I hope some of you will hear me out on this.

Laina and Mr. Kitty are polar opposites in the physical affection department. Laina is very cuddly but ace. Mr. Kitty is hands-off yet almost hypersexual. To say there’s a mismatch there would be an understatement. Poor Laina was starving for physical affection, so she turned to someplace she could get it – from me. Laina and I are identical in that way, we need physical affection but are totally asexual. We still have not, and will not ever have sexual intercourse with each other. Neither of us is fulfilled by such action.

Of course this has been going on for some time, and out of fear of losing the business Laina and Mr. Kitty operate together, as well as possessions, furkids, etc. – we have had to keep it on the hush-hush, until now. Luckily Mr. Kitty is understanding of the situation, but as I had suspected he knew long before Laina disclosed it to him. For now, it seems as though we are out of any immediate danger, which is a relief. It had been weighing heavily on me. Even as much as I love her, I didn’t want to see her lose everything, and from the time this started developing I kept telling her not to do anything stupid or rash.

None of this is a slam on Mr. Kitty, by the way. I like him well enough and get along great with him. We cut up with each other just as I would any other friend. He’s funny and witty and he has some interesting stories to tell about his past life as a police/fire dispatcher. Does it feel weird being in a relationship with Laina that’s extramarital for her? Maybe a bit, and to be fair I had to quash some slight guilty feelings inside me, but I’ve come to terms with it, and especially since they’ve given each other a yellow/green light to have an open marriage, which I should say I have never had anything against, nor have I had anything against polyamory ever so long as all parties are consenting adults.

Now, this is the first time I’ve dated someone A) older than me, and B) a fellow aspie/autist. I think both of these elements work in my favor. It does take someone older and more mature to handle me and there are markers in my natal chart that suggest I am attracted to older people. My last relationship was with someone 8.25 years younger than me and it was an absolute disaster. This time I’m with someone 9.5 years older and it’s so much smoother. Concerning the latter factor, I think it helps us to understand each other better, how we click, what makes us tick, and helps with communication and understanding.

Am I going to say the above are universal elements? No, but if you are on the autism spectrum and looking to date as it were, perhaps staying inside the community is the better bet. There are exceptions to every rule of course, and take my own experience with a grain of salt, but that’s how I personally see it.

So that’s that. Again, I’m sure it’s no surprise to most of you. Hell, it came as a surprise to me even. I was not expecting this to come out of all this, but what happens does. The heart wants what the heart wants, after all.

It’s been since I’ve moved to San Antonio since I’ve even written anything on here. I’ve been busy settling in, exploring, visiting wineries in the hill country, that kind of thing. I’m also learning American Sign Language via free classes taught by the honors students of a local high school program.

Anyway, I digress. I still feel like I’m out of inspiration for blog posts for now, especially given how the central themes of this blog have seemingly gone by the wayside. I never got much traffic on any of my autism or tattoo themed posts. Most of my traffic has been on my political rants and my most popular post to date is the DIY tutorial on how to cut Daisy/Davy Dukes. Like seriously? I mean it was a fun post but surely there aren’t that many guys especially who have the guts to wear anything besides sissy-ass long shorts.

I’ll definitely keep this blog open. It costs me nothing to leave it here. I’ll check in from time to time, but I’ve got quite a big announcement coming soon. Some of you who have stuck with me the past few months are likely going to know what that is, but I’ll let it brew for now.

After a 9 hour round-trip journey with Laina from San Antonio to my former home just outside of Abilene and back in a U-Haul GMC Savana, I am now officially a San Antonian.

I gotta say it feels good. I’m finally out of a trap it feels like. It’s a relief. I’m so excited for my new adventure in a new home, especially closer to a special someone.

Here’s to better days ahead!

Lynn B, The ”Inked Autist”

Tatted up and on the spectrum.